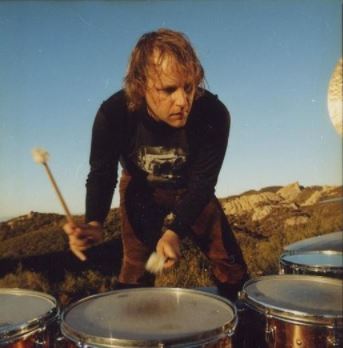 Entered the L.A. music scene in 1994 with Drill Team, after years in the suburbs.

Jim has played with a number of groups and configurations: Drill Team (drums), Wondermints (bass/drums), Quazar and the Bamboozled (bass/piano/banjo), The Dukes of Silverlake (guitar/ bass/ drums/piano), Dream Apes (guitar/drums), Farmer Dave Scher (bass), Malcolm Mooney (drums, for about 10 minutes), Sidewalk Society (keyboards), and The Sexies (keyboards), as well as various tribute shows (Abbey Road, Syd Barrett, XTC, The Hollies, Yes, Bowie, Richard Derrick, The Action) and a live note-for-note re-creation of “Revolution 9” in 2015. He has appeared on stage or record with about 12 of the Loteria! crowd.

But his main thing is his own band, Extra. Starting as a total solo project (two albums have so far resulted: F R double E from 2006, and the triple album Sun Tower from 2019), it has become an actual four-person group.