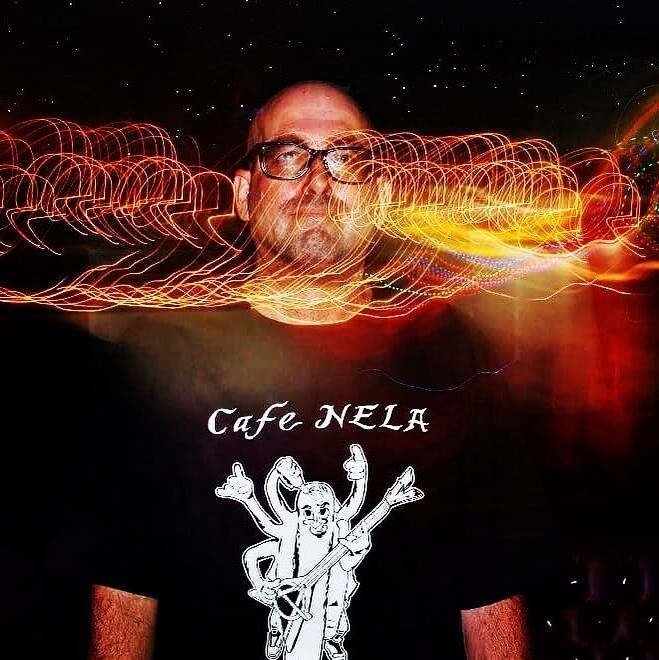 Dave Travis played his first club show on Dollar Punk Tuesday at the Cathay De Grande, April 1984 with Permanent Trails. He has played Cello in bands like Carnage Asada, Cello Pudding, WACO, and The Gitane Demone Orchestra. Dave has played on eleven albums that have been released in the last 35 years.

Dave Travis is better known as being the impresario behind Cafe NELA, a music venue that was a center for punk and outsider music that brought bands from around the world to Cypress Park, Northeast Los Angeles from 2013-2019. He is also known for being a video archivist of the Los Angeles Scene with an archive of a couple thousand performances he captured on video from 1983-present. He also worked on a bunch of movies and videos for bands such as Black Flag, Sonic Youth, Nirvana, and The Gears, and companies such as CBS, Van Duyne Engineering, and We Got Power Films.

Dave Travis helped put on a bunch of music festivals such the L.A. River Music Festivals, Bloomfest, The Hollywood Stage of the Los Angeles Marathon 1994-1995; and generator shows such as Skull Rock, Dust Fest, and The Splattering of Tribes.

Dave served his community by teaching Middle School History and High School History and Economics in South Central Los Angeles 2001-2007. From 2014-2019 he was on the Cypress Park Neighborhood Council, where he was President twice and Vice President twice where he put on music festivals and fought for public access to the north bank of the Los Angeles River in Cypress Park and against road diets.