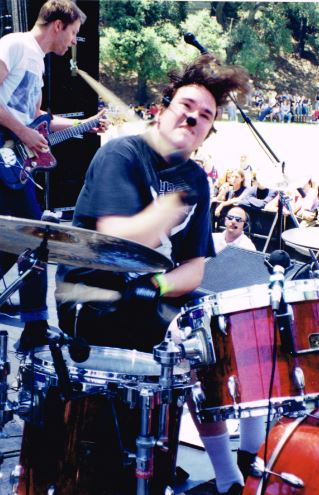 Bob Lee entered the music scene as a member of Instrumentally Speaking in Lambertville, NJ (including future members of Boxcar Lilies, the Moistboyz and Sound of Urchin) who performed their original opus “Death in Holland” in March, 1985, while high school students, playing at at the State Teen Arts Festival. While attending Antioch College in fall of 1986, he served as the drummer of the Gits during their first two months of existence.

He arrived in LA in October, 1988 and almost immediately joined forces with Crawlspace. beginning an on and off relationship that would last till the group’s 2018 disintegration. He joined Claw Hammer in the spring of 1990, touring America multiple times and recording six LPs. He has recorded and performed live as a member of Backbiter, Mike Watt and the Black Gang, Jon Wahl and the Amadans, The Freeks, Kurt Stifle and the Swing Shift. The Rotters, Fearless Leader, Hot Damn!, Upstart, Santa Sabbath, Fitted (with Mike Watt, Graham Lewis and Mathhew Simms), Solo Career, Nastassya Filippovna, The Mecolodiacs, Paper Tulips,  and many others. His discography includes session work for Mike Watt (appearing on “Piss Bottle Man” from the Ball-hog or Tugboat album and the Mike Watt & The Bobblymen EP), Devo (Supercop soundtrack) and Wayne Kramer (The Hard Stuff album). He picked and recruited nearly all of the bands on the 2018 Christmas compilation album Something Shocking From The Stocking (JoZee Records).
Photo by Elise Thompson.

KURT STIFLE AND THE SWING SHIFT

SANTA SABBATH & SOMETHING SHOCKING FROM THE STOCKING